Wineries, Breweries and Distilleries in the San Juan Islands

The San Juan Islands have a long history of creating exceptional beer, wine, and spirits from local ingredients with careful craftsmanship. In fact, some locals affectionately call Friday Harbor “a little drinking village with a fishing problem!” Here’s our guide to a few of the very best wineries, breweries, and distilleries in the San Juans. If you’re planning a visit, don’t miss out on your chance to enjoy some of the best inebriants our island community has to offer. 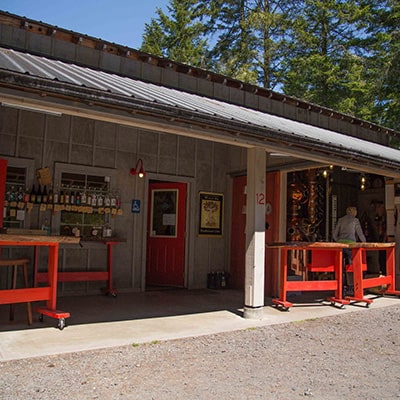 Westcott Bay Cider grows its apples in an orchard dating back to the 1870s, when the San Juans were known for supplying the Pacific Northwest with much of its fruit. Westcott Bay Cider released its first retail cider in 1999, and has been perfecting the art for almost two decades now. This cherished cider house produces three ciders of varying sweetness, and has become an iconic go-to for a fun, and very relaxing afternoon.

In 2010, Wescott Bay Cider joined forces with two new partners who were passionate about starting a distillery. The cider making operation expanded to include the San Juan Distillery, which creates apple brandy, pommeau (a casket-aged combination of brandy and fresh juice), liqueurs, and 12 different gins.

The climate of San Juan Island is very similar to Normandy, the area of France known for its apple orchards. The cider, brandy, and pommeau of Wescott Bay Cider and San Juan Distillery is the closest you can come to Normandy while staying stateside. Come raise a glass of eau de vie, a clear, fragrant apple brandy created in a hand-hammered German copper still, and toast the bounty of San Juan.

What could be more San Juan than a microbrewery in a boat repair shop? The Oar House is just that—a tiny, eccentric brewery that makes damn good beer for a strictly local audience. The Oar House isn’t a commercial brewery. In fact, they don’t even bottle their beer. In order to try one of Oar House’s 12 rotating taps, you’ll have to drop by their tiny brewery in person and order right from the bar of their nautically-themed tasting room. They’ve got peanuts, free popcorn, and a loose BYO-food policy if you’d like to eat in. We recommend grabbing a loaf of fresh bread from Bakery San Juan, which is just down the street, and washing it down with a pint or three. 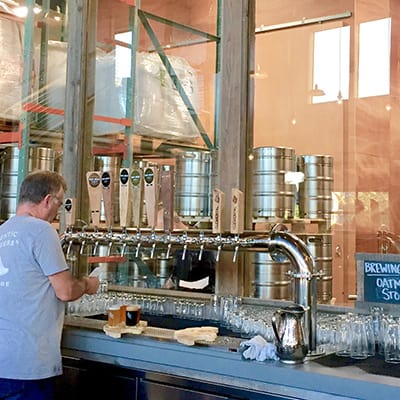 Island Hoppin’ Brewing knows beer. The tagline of this Orcas Island favorite is, “Beer inspired by the sea, sky, and earth of Orcas Island,” and the drafts here draw both their inspiration and their ingredients locally. The seven rotating taps are the pride of Orcas, and you’ll probably want to take a growler of your favorite away with you. 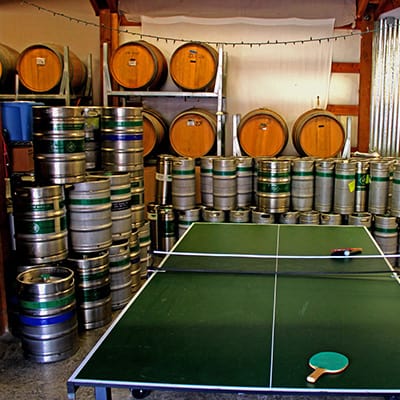 Smoked salmon, herbed goat cheese, or Bavarian salami are available for snacking. The foosball, air hockey, and ping pong tables make Island Hoppin’ popular destination for families. And not only is Island Hoppin’ kid friendly, but you’re also likely to see a dog or two roaming the room. It’s certainly not fancy, but you couldn’t ask for a friendlier, more community-oriented environment than this brewery. And if you want to talk to some beer nerds about brewing, the bartenders here will happily talk your ear off.

San Juan Vineyards isn’t just an amazing destination—they also create some truly delicious wines. Their whites are really their claim to fame. Sample their Madeleine Angevine, which earned a gold-medal in the highly-competitive 2014 Tri-Cities Wine Festival, or their Siegerrebe, which has been decorated in multiple wine festivals for multiple years.

The ambience is almost as good as the wine. The tasting room was constructed in a renovated school house built on the property in 1895! Beside this schoolhouse sits a 30-acre vineyard, planted with the grapes for both the Madeleine Angevine and Siegerrebe. (It’s no surprise that their best two wines are the ones grown locally!) 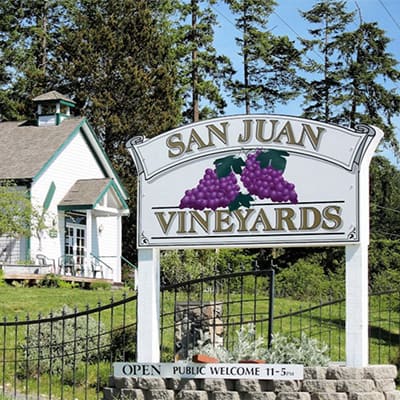 This father-son operation began in 2011. Their mission was to make the best wine in Washington. We believe this area has some pretty stiff competition when it comes to wine, but Orcas Island Winery gets very close to their goal. This young winery will only get better with every passing year, as their new vines mature, and it’s been amazing to see what they’ve already accomplished.

Try a tasting flight for $10. If you buy a bottle (starting at $20) the flight is free, and you’re bound to find a bottle you like from among the choices of reds and whites. Many patrons rave about the Cabernet Sauvignon, so after you’ve stocked up on whites at San Juan Vineyards this might be a good addition! There is also a gorgeous view of Turtleback Mountain to enjoy from this woodsy winery.

Lopez Island Vineyard and Winery is a passionate purveyor of wines as well as a good steward of the environment. Their Madeleine Angevine and Siegerrebe vines (planted in 1987) are grown with completely organic processes, and they import their other grapes from trusted organic farmers in the Yakima Valley.

We highly recommend Lopez Island Vineyard if you’re looking for the perfect compliment to a seafood dinner. Their crisp, tropical, and delicate Madeleine Angevine is the ideal island wine, designed to pair well with all the seafood found in the San Juans. Grab a bottle from the Lopez Island Vineyard, buy scallops from the nearby Jones Family Farm, and spend an evening cooking in that’s bursting with San Juan flavors.