What is Glamping and Why Do I Want to Go?

First things first, what exactly is this glamping thing everyone is talking about? The term originally appeared around 2005 in the United Kingdom, long a country known for its love of the outdoors and countryside, but apparently not for its elegance in mashing-up words. Glamping combines the words “glamorous” and “camping” and, despite its awkward sound, is a hot trend.

Its early origins date from the 16th century, when the Scottish Duke of Atholl was being visited by King James V and his mother, and housed them in the Scottish Highlands in luxurious tents filled with all the comforts of home (read: palace). Fast forward to the Ottoman empire, whose sultans traveled from battle site to battle site with palatial tent dwellings, transported by teams of artisans to assemble and maintain them.

African safaris became the rage in the 1920’s for wealthy Americans and Brits, but these travelers weren’t willing to sacrifice creature comforts in pursuit of adventure. Their glamping accommodations included folding bathtubs, cases of champagne, Persian rugs, and a chef to prepare meals.

Supposedly, 21st century glamping arose when international financial troubles created demand for luxury vacations without a high price tag. Some say glamping is really “comfortable camping” because its two main features are the great outdoors and a comfortable bed, but glamping goes far beyond this, depending on where you go and how you do it. Prices can range from as little as $100/night to upwards of $3,000/night and can involve tent cabins, yurts, travel trailers, tree houses, teepees and more.  The price you pay will also usually dictate the level of service you receive, think: fresh bed linens,  in-tent bathrooms and food service. Most glamping experiences focus on the complete comfort of guests (who love the natural world) and their spouses (who may not).

And if all that comfort hasn’t tempted you, maybe this description from Glamping.com will convince you why you want to go glamping…

Because you get the best of camping: 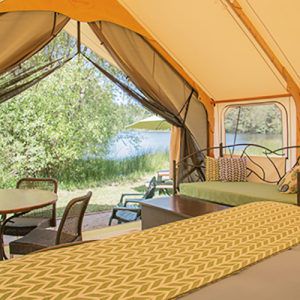 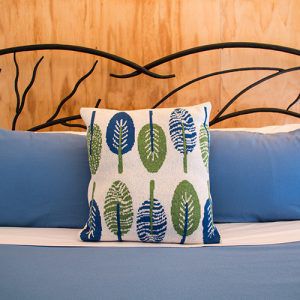 Without the worst of camping:

Lakedale Resort offers LOTS of glamping options, from our roomy Canvas Cabins, to our new luxe Canvas Cottages with en suite bathrooms and a glitzy chandelier, to our fully renovated Airstream trailer…we have a glamping adventure just waiting for you. And remember to ask about Toasty Toes, our signature night-time treat!