It would be an understatement to say that we love and appreciate our natural environment and the various species of wildlife that make their homes on San Juan Island.  I mean, who wouldn’t love to be able to watch Bald Eagles hunt from their living room couch, or take a five minute drive to watch whales swim by…from land?  Frankly, we’re even more grateful for our island’s wildlife here at Lakedale because it’s a huge part of our local economy, bringing lots of visitors to our resort, and allowing us to do what we love in a place that we love!

San Juan Island is most famous for our marine wildlife, with Orcas taking the top billing, but we think that our terrestrial wildlife is every bit as amazing!  Spending even a small amount of time relaxing at Lakedale will net you daily sightings of deer, hundreds of different bird species, foxes, and even the occasional turtle or otter.  As I write this, there are 14 Trumpeter Swans swimming twenty feet from the deck of our Lodge.  And yes, they frequently do that thing with their necks, making a heart shape that you see on Valetine’s Day greeting cards!

Obviously, it’s these species of land-based wildlife that we encounter the most on a day to day basis at Lakedale.  Just being able to observe them going about their business is a treat in and of itself, but sometimes we get lucky and have interactions that are a little more special for us, and we love sharing these stories. 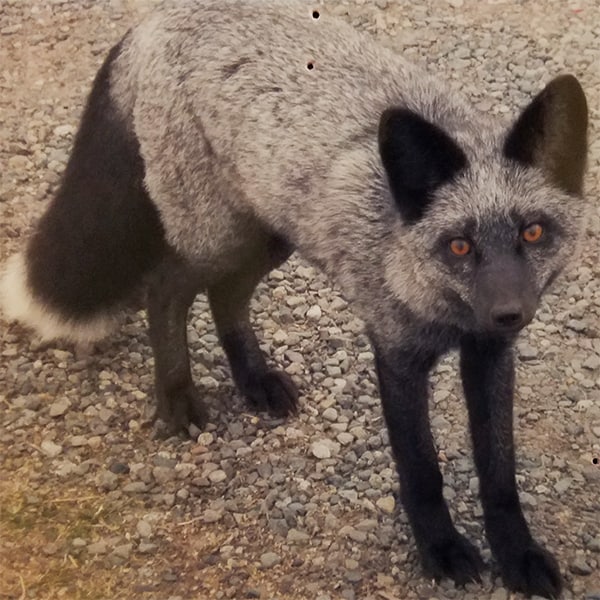 San Juan Island is a natural habitat for the red fox. While the common name for the species is “red fox”, they actually can have several different pelt colors, including red, brown, black, silver and platinum.  We typically see the silver variety around Lakedale (black face, salt and pepper body, and a black tail with a white tip), while the red and orange variants live at the southern end of the island.  The red fox is primarily a nocturnal species, but they do roam during the day, especially in late spring, being very curious, and extremely playful animals.

Back in the summer of 2012, Kelly (Lakedale’s Campground Supervisor) and I did the night time property patrols together.  Those were some long days, but the night walks sometimes served as a nice wind down to the day for both of us. One night, we noticed there was a fox following us everywhere we went.  He was almost 3 feet long from nose to the base of his tail, and probably weighed 25 pounds, which is really big by red fox standards.  We’d walk along the roads, and he’d follow us in the bushes.  In places where there were no bushes, he’d get onto the road and stay about 10 yards behind us.  We’d stop walking, and he’d stop walking.  If we went back to our maintenance hangar area to sit down, he’d be there with us, maintaining that 10 yard distance from us.  After about a week of this, Kelly and I did what all normal human beings do in that situation: we gave him a name.  Of course, because we’re geeks, we named him “Guy Fox”.  Guy stuck with us every night that entire summer season.  He began to close the distance between us after a bit, and we’d talk to him, but we never fed him.  “Time for another patrol round, let’s go Guy”, and we’d be off.

Fast forward to the beginning of the summer season of 2013, and we were  training a new staff member to do the night patrols.  It was our first night out, and we were talking about the tasks, the routine, and what to expect from that shift:

Me: “Oh yeah, there might be a fox that follows you around here at night.  Don’t freak out, he’s one of us.”

Me: “Yeah, Guy Fox has been following us for the last 10 minutes. You haven’t noticed?”

I turned my flashlight on, shined it in the bushes and immediately the new staff member saw two eyes staring back at him…Guy was only about 5 yards away!  Of course, I apologized to Guy for shining my flashlight directly into his eyes.

Me: “We don’t have any gunpowder on the property, so you’re probably safe with Guy, but always remember he’s there.  Remember, remember…” 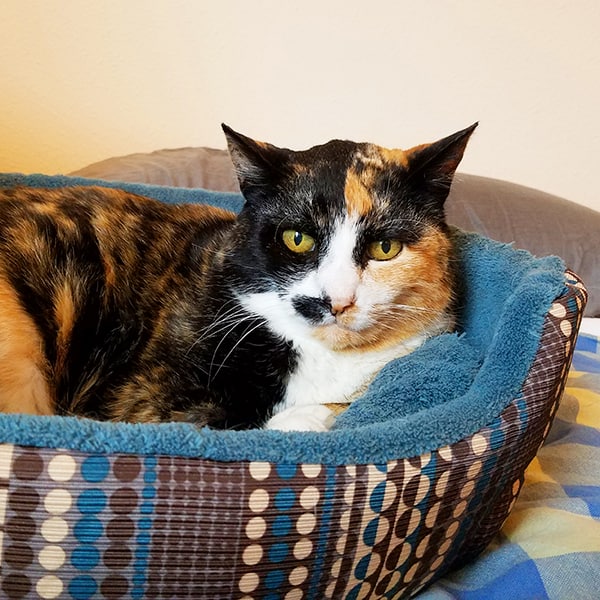 The Lady of the Lake…dale

While we’re on the subject of animals tagging along with us at night, allow me to tell you the story of the Lady of Lakedale.  In May of 2017, during one of the aforementioned night walks, I got a visit from a tiny, skinny calico cat.  Because it’s nearly impossible for a male cat to have the calico fur pattern, I immediately knew she was a female.  I tried calling to her, but she wouldn’t come over any closer than several yards away.  That only lasted for a few nights though, and by the end of the week she was allowing me to pet her.  She was a very sweet, friendly cat so I assumed that she was a young stray instead of feral, but I wasn’t sure so I let her do her thing and didn’t encourage her to stick around by feeding her.

Well, May becomes the second week of July really quickly around here, and she was still hanging out with me every night.  She wouldn’t follow me around the entire property like Guy Fox would.  Instead, she preferred to wait for me to come back to the maintenance hangar, and get her face pets between patrols.  We close the Front Desk at 9:00pm in the summer, so after we closed up I introduced our other staff members to Lucy.  She’d always be out of sight, but all I would do was walk out to the hangar, call her, she’d meow a few times,  then appear out of the bushes.  One night in July we introduced the kitty to Carla, Lakedale’s Sales Coordinator, who was shocked to find out that we hadn’t given her a name yet.  “You’ve been hanging out with a cat at work for almost three months, so she’s basically a summer employee at this point”.  Carla named the kitty “Lakedale Lucy”, and that was that.

Lucy’s visitations went on, every night, from the end of May until the beginning of October.  The weather began to get progressively rainier and colder, and we started seeing Lucy out during the day a lot.  She was getting skinny, and looked like she was in rough shape, so my girlfriend and I decided we’d give Lucy a nice home, out of the elements.  We took Lucy to the vet for a checkup before bringing her home, and it turns out Lucy wasn’t a kitten.  In fact, the vet estimated she was 13 years old.  Wow!  Now surrounded by fluffy cat beds to lie in and kitty castles to play on, Lucy is definitely enjoying her retirement from Lakedale! 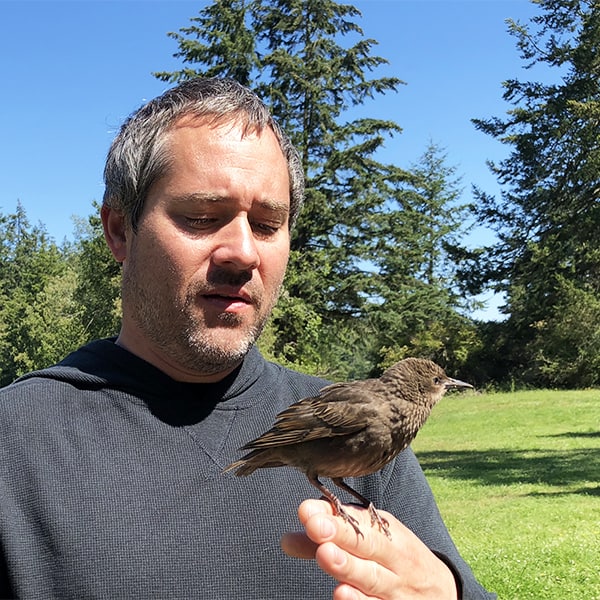 The Summer of Steve

The Guy Fox and Lakedale Lucy odysseys unfolded mostly behind the scenes and at times when many of our guests had already turned in for the night.  However, if you visited Lakedale during the summer of 2018, it’s highly probable that you came face to face…literally…with the commander of Lakedale’s naval air wing, “Commodore Steve”.  One day in early June, Kelly and I met outside of the maintenance hangar where we store our firewood.  This is the conversation, pretty much verbatim, that started this epic saga:

Kelly: “On the way over here I passed by the Dream Cottage and saw that the couple staying there is taking pictures of a bird that landed on the husband’s hat, just out of nowhere.”

Me: “Maybe he should run for President?”

Kelly: “No seriously, it’s pretty funny.  We should ask them if they can send us the pictures so we can post them on Facebook, or something.”

In that instant, a bird landed directly on Kelly’s hat, sat there for a couple of seconds and then jumped down to the ground and proceeded to stare at each of us in turn.

Me: “There couldn’t possibly be two of them, right?”

Kelly: “Nope, that’s him.  The rules clearly state that we have to name him.  Right now.”

Kelly: “Nah, he deserves something flashier.  A title, maybe.”

Kelly: “He’s obviously above Captain, but clearly beneath Rear Admiral.”

From that moment on, the 2018 high season at Lakedale became known as “The Summer of Steve”.

Commodore Steve was a very juvenile starling who appears to have thought he was a human being.  We think it’s more likely that he thought of himself as a legitimate member of the Lakedale staff, if not part of the management team.  He frequented the mess tent during breakfast time.  He helped the General Store staff with tie-dye making and other activities (his favorite was bird house painting, obviously).  He took breaks with the Lakedale team, and he spent a ton of time hanging out with our guests and their children.  Steve…was…everywhere.  He even spent a lot of time helping the artists put together our first sculpture installation, “Embark/Embrace” (check out that blog post for a great picture of Steve doing what he did best: supervising the work from atop Anthony’s head)!  At first we thought he was a little “crazy”.  It turns out he was just as excited to be at Lakedale for the same reasons we are, and in that sense, we’re all a little crazy for this place!

We’ve got tons of other stories about bullfrogs, huge largemouth bass, dogs and even stampeding cows.  Basically, we’re always looking out for the next interesting animal story, and maybe even the next seasonal mascot!  So, the next time you visit Lakedale (whether you’re glamping, camping, in our lodge or log cabins) and especially if you’re coming to escape the grind of daily life and connect with nature, keep an extra close eye on your surroundings.  Because sometimes when you connect with nature, nature connects with YOU! 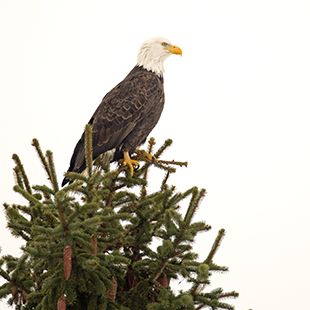