Even with so much to do on San Juan Island, we occasionally get a hankering to do a little “off-island” exploring. And the Washington State Ferries make it so easy to travel from your San Juan Island lodging to Orcas, home of Moran State Park and some of the best whale watching on the islands. So hop in your car or jump on your bike and ferry over to Orcas Island!

Orcas, the largest of the San Juan Islands, is shaped like a giant horseshoe- 57 square miles of gorgeous and is known locally as “the Emerald Isle”. It’s also home to the tallest mountain in the San Juan’s and a series of quaint villages, ripe for exploring. Orcas is also probably the hilliest island of the San Juan Archipelago, so while it’s great fun in a car, you’ll get a workout if you’re traveling on a bike.

Here are a handful of our favorite day trip activities while on Orcas Island:

The Orcas Island Scenic Byway is a great roadmap for your Orcas adventure. Follow this two or three-hour self-guided tour (although it can take the entire day with all the fun stops you’ll make) on the main road around the island. The Byway is part of the recently designated San Juan Islands Scenic Byway, cited for its unique, rugged beauty and cultural importance. 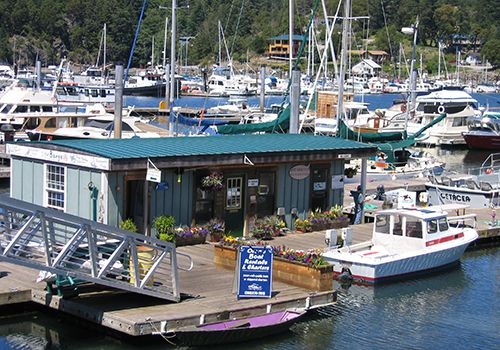 Orcas Village and Ferry Landing (or “the Landing” if you’re a local) is the first hamlet you’ll encounter as you exit the ferry. Stock up on picnic supplies at the grocery store, visit the historic Orcas Hotel (built in 1904), or if you’re on foot, you can rent a moped for your island excursion. Octavia’s Bistro at the Hotel offers casual dining- including vegetarian fare, drinks, and on Friday nights, jazz and wine overlooking the harbor.

Then, head to the Deer Harbor Marina, about 20 minutes west of the ferry landing. This is the water capital of the island with boating, crabbing, kayaking, whale watching, and fishing all available…as well as going for a stroll on the picturesque docks. Grab a cup of locally roasted espresso or a scoop of the famous Lopez Island Ice Cream for a mid-morning energy boost.

From Deer Harbor make your way past pastoral orchards, apple barns, and gardens (and the local 9-hole golf course) to Eastsound. With a population of 3,700 residents, Eastsound is at the head of the East Sound Fjord and is the business and cultural center of Orcas Island. Gift shops, boutiques, galleries, restaurants, and bakeries will tempt you, so allow some time here.

To get a sense of island history, visit the Orcas Island Historical Museum, which both kids and adults will be wowed by! Six original homestead cabins, along with artifacts (over 6,000!) have been reassembled to exhibit scenes of Native American and early settler life on the islands. 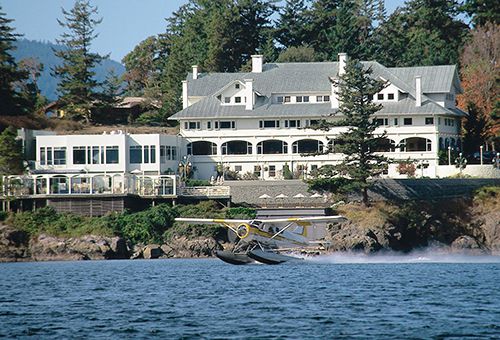 The Emmanuel Episcopal Church, located on Main Street, is also worth a visit…it is a historic Carpenter Gothic church built in 1885 and is listed on the National Register of Historic Places.

If you haven’t eaten lunch yet (our favorites in town are the New Leaf Café, Brown Bear Baking, Madrona Bar & Grill and Mijitas) time to go to Rosario Resort! The granddaddy of island hotels, Rosario was built in 1906 by Robert Moran, a shipping magnate, who had been given a dire medical prognosis and wanted to live out his days in comfort. He proved the doctors wrong and built the Moran Mansion: 6,000 square feet of old-world elegance, teak parquet floors, Tiffany chandeliers and a working 1,972-pipe Aeolian organ. Local historian Christopher Peacock gives an entertaining talk and plays the organ on Saturdays at 4:00 p.m. In the summertime, presentations are every day but Monday and Tuesday. It’s complimentary for visitors!  Dine at the Mansion Restaurant, with a spectacular view over the harbor and watch boats and seaplanes arrive and depart.

You might want some exercise at this point in your day trip, so time to head to Moran State Park and Mt. Constitution, at 2,409 feet, it’s the highest point in the San Juan Islands. The park’s 5,252 acres include five freshwater lakes, 38 miles of hiking trails and numerous waterfalls. You can drive (hike or bike) to the top where you’ll discover a stone observation tower built by the Civilian Conservation Corps in 1936 during the Great Depression. Climb to the top of the tower and be awed by a panoramic view of the Salish Sea to snow-capped Mt. Baker and the neighboring islands. 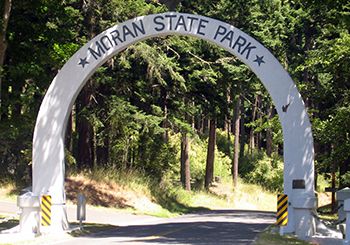 If you’re up for more wildlife, explore stately old growth forests and grassy meadows on horseback with a guided ride from Orcas Island Trail Rides. Or skip the exercise altogether and head down to the shores of beautiful Cascade Lake with a good book! 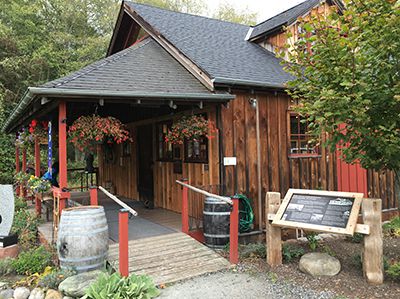 A trip to Orcas wouldn’t be complete without a stop in Olga, just past Moran State Park. Housed in the historic Olga Strawberry Barreling Plant and in operation for 75 years, Orcas Island Artworks is an artist’s co-op featuring an amazing selection of local arts and crafts. Think sculpture, jewelry, paintings, wearable art and more. Since the artists own the gallery, you will more than likely meet one or two while you’re there! The Artworks is also home to the Catkin Café for a quick pick-me-up if you’re there between 9 a.m. and 3 p.m.

Last, but certainly not least, save some room for Pacific Northwest cuisine at Hogstone’s Wood Oven in Eastsound on your way back to the ferry. Chef Jay Blackinton was recently named one of Food and Wine Magazine’s Best New Chefs of 2017 for good reason! Blistered pizzas, along with exquisite wood-fired dishes and vegetarian fare showcase ingredients from Maple Rock Farm, owned by the chef’s partner, the forest or the ocean that surrounds the island. Green eggs with whipped goat cheese and grilled kale, anyone? Hogstone’s is open Thursday through Monday at 5:30 p.m.

And when your day tripping is done, head back to Lakedale for sweet dreams of more island adventures!

Take a Romantic Winter Weekend Getaway!
How to Plan a Wedding in the San Juans
12 Tips for Fall and Winter Weddings on San Juan Island
Furry Friends and Feathered Fun!