If meeting new people could be considered currency, then Lakedale is staffed by some of the wealthiest people on the planet.  For us, interacting with and serving our guests is honestly the best part of our job.  It could be the one thing that we all have in common, and it brings us together as a family.  If we haven’t already met, we hope to meet you soon, but in the meantime allow us to introduce our core management team. 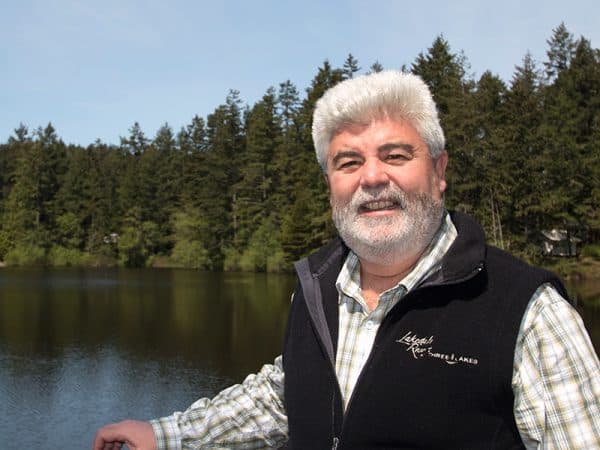 The buck always stops with the boss, as the saying goes.  Karl has been Lakedale’s General Manager since 2012, and he’s ultimately responsible for taking our owner’s vision and turning it into reality.  While most GM’s spend the better part of their days behind their desks in their offices, that’s not Karl’s M.O.  If he’s not greeting and chatting with guests, he’s with our housekeeping crew helping to prep an accommodation, or he’s in the kitchen cooking for a corporate retreat, or maybe he’s meeting with staff planning the next big Lakedale project.  If you’re looking for Karl on Labor Day Weekend during Lakedale’s annual Jazz Festival, you’ll most likely find him on stage jamming on the drums with one of the bands!  Karl’s happy place at Lakedale though, especially on sunny summer days, is on the riding mower with a pair of sunglasses.  Yep, he’s a pretty busy guy, but he always makes time for our guests.  So, if you see a guy in the distance that looks a little like George Lucas, stop and introduce yourself, and tell him how much you love the Star Wars movies (Shhhh, don’t tell him we told you that last part!) 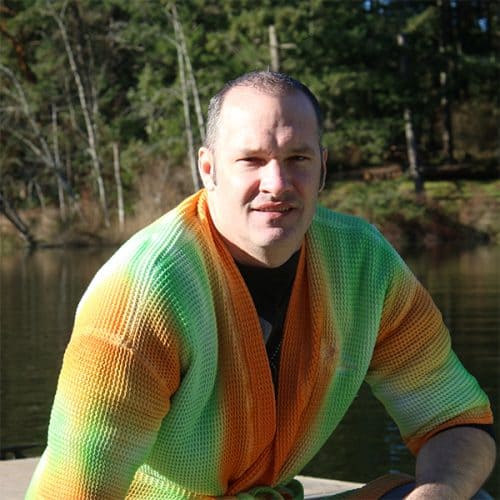 If the buck stops with Karl, then all of the quarters, nickels, dimes and pennies stop with our Operations Director, Richard.  Beginning in 2012, if it has to do with the day-to-day operations of Lakedale, it’s been on Richard’s plate.  An avid details enthusiast, he feels more like he’s coaching a sports team than managing a resort operation.  Richard has a unique ability to turn every 10 second comment into a 10 minute conversation.  No really, the guy has to change the battery on his walkie-talkie like twice a day!  Along with keeping the daily routine going, and entertaining the rest of the team with stories they’ve heard 10 times already, Richard spends a lot of time on more “creative” endeavors like special package and promotion ideation, copy and collateral creation, and he even writes some of Lakedale’s blog posts.  We won’t confirm this, but he may have written this very post you’re reading right now (which is kind of weird with the whole 3rd person thing, right?) 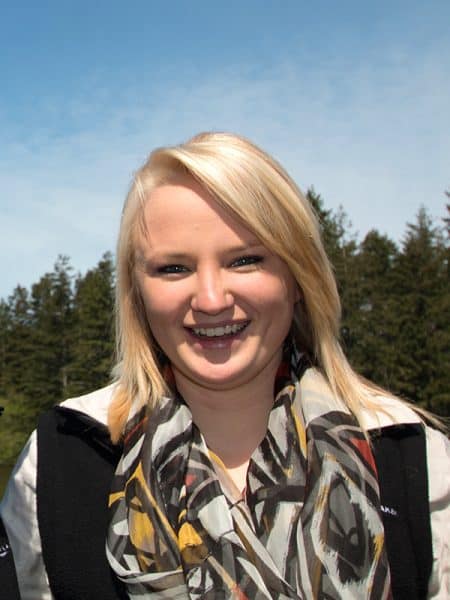 Back in 2014, Lakedale hired Carla as a seasonal Front Desk agent.  We immediately recognized her awesome skills, and after something like a week’s worth of training, we promoted her to a full time Front Desk Supervisor position!  Over the next two years, because of her enthusiasm and consistent eagerness to take on new tasks, her list of responsibilities grew to include some of our group sales and event coordination workload, in addition to managing the Front Desk, Lakedale’s beating heart.  In 2016, Carla promoted herself to another new full time position, managing another beating heart…that of her brand new baby daughter!  As all parents would know, there isn’t a job in the world that requires more dedication, attention to detail, and time management than being a new mother.  So, when Carla came back to us in 2017, she got another well deserved promotion to apply those skills as Lakedale’s full time Group Sales and Events Coordinator.  Carla dives into the details of every meeting, retreat and wedding right from the start, but she especially loves working through itineraries and directing our staff en route to smoothly running events.  We think she’s just practicing her “Go clean your room” skills on us, but none of us are brave enough to test her when she tells us to do something.  Nope, not even going there. 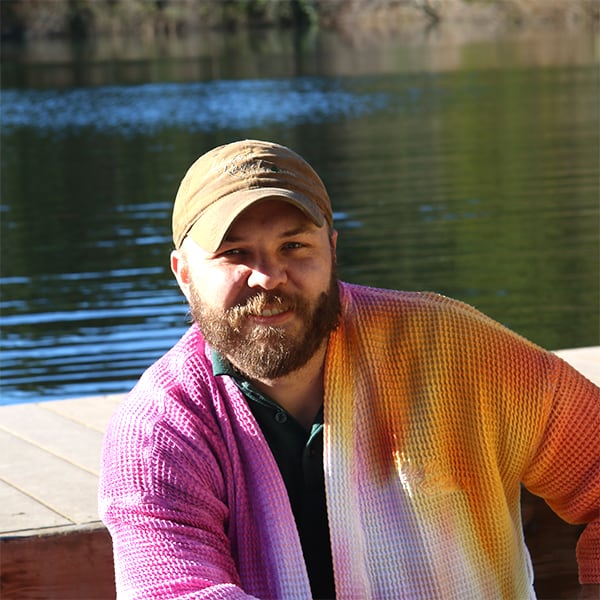 Lakedale’s Campground Supervisor, resident lawn games nerd, and creator of outdoor awesomeness has been with us since 2012.  If you find yourself north of the main Lodge building at Lakedale, you’re officially in Kelly’s world.  Kelly and his crew are responsible for caring for Lakedale’s Campground and Canvas Cabins, in addition to all of our outdoor games, beaches, boat rental docks, and landscaping.  If he’s not on a mower, a weed whacker, or the tractor, you’ll probably find him planning or setting up some cool game or activity for our guests to enjoy.  In fact, if you look around the property and see something you think is cool, chances are good that it was either Kelly’s idea, or he played a part putting it there.  “Hey Kelly, whatcha’ doing?” – “I’m at the shop making a Koob set and a Molkky set on the table saw”.  “Hey Kelly, whatcha’ doing?” – “I’m building regulation horseshoe pits”.  “Hey Kelly, whatcha’ doing?” – “I’m creating a trail down to a lakeside fire pit for guests to use”.  And at the end of every day he looks around and says “What do I do here?”  You see, it isn’t “work” when you’re having fun! 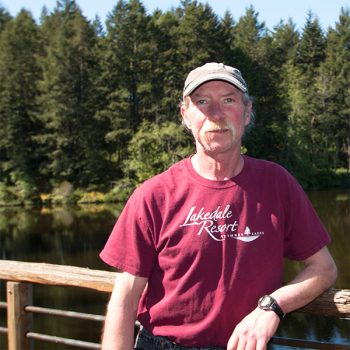 Most people would find taking care of 9 different types of accommodations and multiple facilities, spread out over 82 acres, to be a job that’s more than overwhelming.  We’re extremely fortunate that Errol, Lakedale’s Maintenance Supervisor, isn’t most people!  Imagine being in charge of all of the maintenance of all of Lakedale’s facilities, fixtures, equipment and vehicles, in addition to being responsible for all of the new projects and additions that we do here every single year.  As if that pressure wasn’t enough already, Errol’s first day of work was opening day in 2012.  That’s right, he skipped the frying pan altogether and just jumped straight into the fire!  Errol really is the backbone of Lakedale’s team, because he literally keeps the lights on, the water flowing, and the wheels spinning.  He’s all work and little talk, so when we apologize to him for heaping so many projects onto his plate, he usually just smiles and says “It’s all job security”.  One of these years we’ll give him a breather and stop adding so many new things for him to keep track of, but we don’t think you should hold your breath for that! 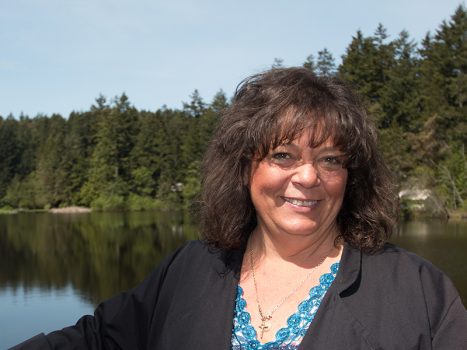 If you’ve stayed with us before, or you’ve been following our Facebook page, then Mary Ann needs no introduction!  Like most of our core team, she started working with us in 2012, making this her 7th year at Lakedale.  Her title is “Director of Edibles”…no, not those kinds of edibles!  Mary Ann flies cover over about a million and a half things for us, primarily food and beverage production, special package production, and purchasing for our General Store and Lodge Boutique.  If you happen to be staying in a Lodge Room when you visit Lakedale, more like than not it will be Mary Ann’s smiling face that you’ll see in the morning for breakfast.  She’ll give you a full rundown of all of the things that you’ll need to see and do while you’re out exploring, and serve you up one of her famous “Momelets” at the same time.  What’s a “Momelet” you ask?  It’s that wonderful egg dish that your mom used to make for you that started out as an omelet, but ended up as a sort of half-scramble.  She makes them with love, and our guests love them!  Just like the rest of us, Mary Ann’s favorite thing to do at Lakedale is chat with guests, and make sure that their day is that much better and brighter.  And, because she’s Lakedale’s official work mother, “Momma B” takes care of all of us so that we can take care of you!

And there you have it, Lakedale’s eclectic management team.  Of course, you’ll have to come and visit us to meet the rest of our summer team.  We’ll see you soon!