San Juan Island is one of the best places in the world to whale watch. And you don’t have to be on board a chartered ship to do it! You can spot these majestic marine animals from many of the shores on the western side of our island.

For most visitors, San Juan’s orcas are the main event. May through September, residential and migratory pods of orcas inhabit the waters surrounding San Juan. But anyone who comes for the orcas usually ends up falling in love with the whole gang—you’re also likely to spot minke whales, Dall’s porpoises, harbor porpoises, humpback whales, Pacific white-sided dolphins, sea lions, harbor seals, and more!

Here is Lakedale’s guide to the best places on San Juan to see orca whales and other marine mammals from shore. But no matter where you go, remember this: bring your binoculars! You’ll feel up close and personal even from a mile away.

If you are looking for a more guided experience, check out our guide to San Juan Island whale watching tours.

Lime Kiln Point State Park is officially nicknamed “Whale Watch Park.” This title is no exaggeration—Lime Kiln State Park really is one of the best places on earth to view migrating whales. And if you’re hoping to see whales with your feet planted firmly on the ground, Lime Kiln is definitely your best bet on San Juan!

The shore of the park is composed of granite bluffs that jut into the sea. The water gets very deep very fast, allowing orcas and other whales to come astonishingly close to the water’s edge. (Some scientists have speculated that the orcas use the steep face of the sea floor to trap schools of salmon for easy picking.)

From your perch atop these rock cliffs, you can often see pods of whales passing through the waters below. The interior of this 41-acre park is also prime for exploring with a quick hike. Other sights include the historic lighthouse dating back to 1919 and the remains of the original lime kiln operation, which began in 1860 when the surrounding area was quarried for limestone. 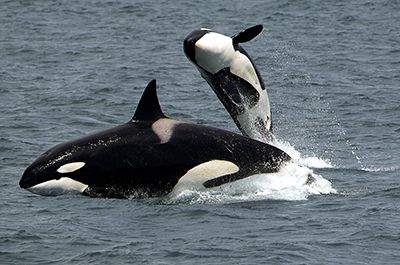 This beautiful park sits at the southern tip of San Juan Island. It was the site of San Juan Island’s famous Pig War, a bloodless and short-lived conflict that erupted between British and American forces in the 19th century.

Like Lime Kiln park, the National Historical Park is also home to one heck of a lighthouse. The Cattle Point Lighthouse was constructed in 1935, and a navigational lantern hung in its place for almost fifty years beforehand. The lighthouse sits at end of the park’s windswept plateau, and the vista of grassland and ocean is one of austere beauty.

Walk along the bluff of the shore toward the lighthouse. You might see some sea lions sunning themselves on the gravel shore beneath. And if you keep your eyes peeled and turned to the sea, you’re likely to catch a glimpse of a breaching whale!

The Westside Scenic Preserve is a favorite haunt for local whale watchers, yet remains out of the pages of most guidebooks. This means the Westside Preserve is the perfect place to go for a more private experience. If you’re a devoted orca lover you’ll fit right in on the bluffs of the Westside lookout, where avid whale watchers often spend hours set up in lawn chairs with their binoculars.

Despite feeling secluded, the Westside Scenic Preserve is publicly accessible from the Westside Road. There’s room for a dozen cars in the parking lot and even if you don’t see any whales, the view is stunning and unforgettable. The 16 acres of the Westside Preserve stretch across a half mile of unbroken shoreline. In front of you, the water stretches out in a blue panorama, and behind you, the grass of San Juan’s ancient prairie ecosystem waves back at the sea.

This stunning park offers many opportunities for on-shore whale watching. Climb one of the rocky bluffs beside the shore and keep an eye on the surface of the sea, or stroll along the gravel beach and dip your toes.

You can also do a little paddling if you want to get even closer to orca territory. This 12-acre park on San Juan Island’s west side is great for launching kayaks. You can explore the basin of Smallpox bay, or take to the open ocean with the proper permits. 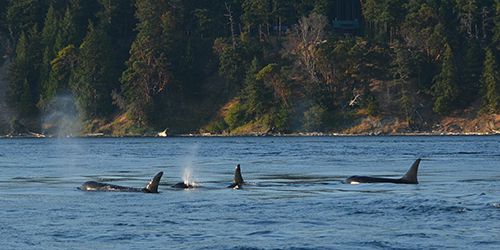 If you don’t see any whales on your trip to San Juan, don’t fret—Friday Harbor has a pretty good consolation prize for you. The Whale Museum here is home to everything orca, including the skeleton of the young orca Sooke, who died in 2012 but lives in on in the museum’s reverent exhibit. There’s also a whale gallery, museum, and gift shop.

Friday Harbor is the most populated city or settlement on San Juan Island. There are ample opportunities for chartering a boat here, but because it’s on the east side of the island, you probably won’t catch any glimpses of whales from shore. However, you might see some porpoises playing!

On San Juan Island, loving whales is part of our culture. We even have an event every year where we gather on the shore of Lime Kiln Park to serenade them! (Seriously—check out the Orca Sing every June!) Many of us islanders grew up whale watching from land, and it’s truly one of the best surprises the sea has to offer.

Remember—you drastically increase your chances of seeing a whale if you plan to stay on the island for more than a day. Book a San Juan Island campsite or lodge room with Lakedale to extend your stay and experience this area’s natural wonders!